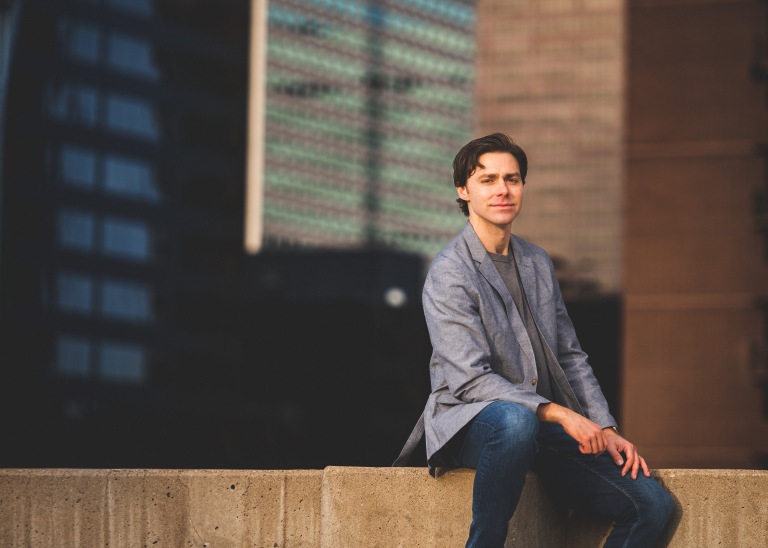 Evan Cauble-Johnson began his musical journey early with a ukulele, patient teachers, and a father who loved to listen to Bob Dylan and Django Reinhardt in equal measure.

As a teenager in Manhattan, KS he embraced the guitar with instruction from Jed Wymore and Curtis Oberle while performing in local jazz and rock groups with his brother, saxophonist Blake Cauble-Johnson. He studied jazz guitar performance at Kansas State University under Dr. Wayne Goins where he developed an appreciation for the classic guitar sounds of the 1950s and 1960s.

In Cuernavaca, Mexico, Evan taught himself to sing, exploring the Cuban Trova musical tradition that was popular in the small clubs and cafes in the city. He continued to develop his jazz bonafides, jamming in venues in Cuernavaca and Tulum with Mexican jazz guitarist and composer, Cris van Beuren.

Later, while studying philosophy at the University of Toronto, Evan majored in making music outside of school alongside Canadian singer, Leigh Graham, and received private instruction from jazz great, Lorne Lofsky.

In Chicago, Evan fronted the Swing Forward jazz group under the musical direction of Phil Balsano, lent his guitar skills as a sideman to R&B singer, Jessica Vann and to singer songwriter, Victoria Fuller, and refined his approach to the guitar with tutoring from New York guitarist, JC Stylles. Evan expanded his musical horizons to include songwriting in Chicago, inspired by the energy and weight of the city.

He relocated to Morrison, CO in 2021 where he lives in view of the angular pinnacles of the Red Rocks Amphitheater.

Join my email list for news about upcoming shows and releases:

Processing…
Success! You're on the list.
Whoops! There was an error and we couldn't process your subscription. Please reload the page and try again.
Advertisement